Check out the link at bottom for video. 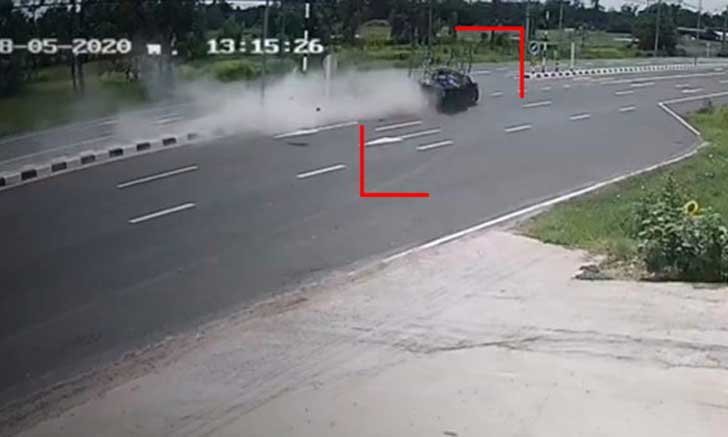 CCTV footage from Route 214 in the Prasat area of Surin in Thailand's north east showed the moment an Isuzu D-Max pick-up crossed the median strip, smashed into a U-turn sign and overturned onto its side.

A witness can be seen running to assist as the vehicle come to a stop a long way down the road.

Incredibly 11 members of the same family all survived mostly unscathed.

Sanook said the accident happened at 1.15 on Tuesday and several rescue foundations and the Prasat police were quickly on the scene where they found the driver of the pickup - Yuthana, 24 - crawling out of the cab.

Alongside him were a woman and a young child. All three suffered injuries but not life threatening.

A child aged perhaps about 2 or three was seen being carried into an ambulance. All three were taken to hospitals.

There were eight relatives in the back of the pick-up. These were hurled out all over the road.

None were seriously injured.

Yuthana said they had left Phanom Don Rak district headed for a market.

He suffered a microsleep that resulted in the accident.

Police were on the scene investigating and assessing damage to state property, said Sanook.

Thailand is supposed to have laws prohibiting travelling in the back of pick-ups but the law is rarely enforced, notes Thaivisa.

- Whatever you're going through, the Samaritans are here for you
- Follow Thaivisa on LINE for breaking COVID-19 updates